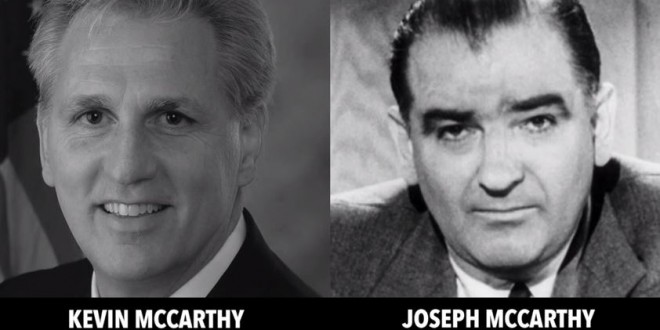 About the new web video ad from the progressive Agenda Project:

“Just like Joseph McCarthy before him, Kevin McCarthy and his fellow Republicans are using their constitutionally granted powers not to advance the interests of the America people, but instead to try to destroy their political enemies,” stated Erik Altieri, Director of Communications for the Agenda Project Action Fund, “It is now clear that the Benghazi committee is nothing more than an multimillion dollar, taxpayer funded witch hunt. Representative McCarthy and his conservative colleagues are embracing tactics straight out of the ‘red scare’ era. These tactics are at best unethical and at worst illegal.”

The “Select Committee on Benghazi” has currently cost the United States over 4.6 million dollars over the course of the past 500 days. A total that does not include costs related to “the independent Accountability Review Board; the eight previous reports by seven Congressional committees; the time, money, and resources consumed by federal agencies to comply with Select Committee requests; or the opportunity cost of not spending this money elsewhere, like improving security for our diplomatic officers abroad.” Running for over 514 days, this “investigation” has now been going on for longer than the federal investigations into Watergate, Pearl Harbor, the Kennedy assassination, Iran-Contra and Hurricane Katrina.

In 2010 the Agenda Project gained notoriety with its “Granny Off The Cliff” ad aimed at Paul Ryan’s proposed Medicare cuts.