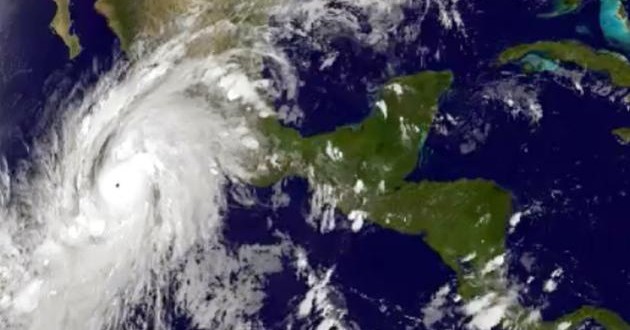 With 200-mph winds, the strongest recorded hurricane in Western Hemisphere history is bearing down on the popular gay resort town of Puerto Vallarta on the Pacific coast of Mexico. The Associated Press reports:

With maximum sustained winds near 200 mph (325 kph), Patricia is the strongest storm ever recorded in the eastern Pacific or in the Atlantic, said Dave Roberts, a hurricane specialist at the U.S. National Hurricane Center. Patricia’s power was comparable to that of Typhoon Haiyan, which left more than 7,300 dead or missing in the Philippines two years ago, according to the U.N.’s World Meteorological Organization. More than 4 million people were displaced and over 1 million houses were destroyed or damaged in 44 provinces in the central Visayas region, a large cluster of islands that includes some of the country’s poorest provinces. In Mexico, officials declared a state of emergency in dozens of municipalities in Colima, Nayarit and Jalisco states that contain the bustling port of Manzanillo and the posh resort of Puerto Vallarta. The governor of Colima ordered schools closed on Friday, when the storm was forecast to make what the Hurricane Center called a “potentially catastrophic landfall.”