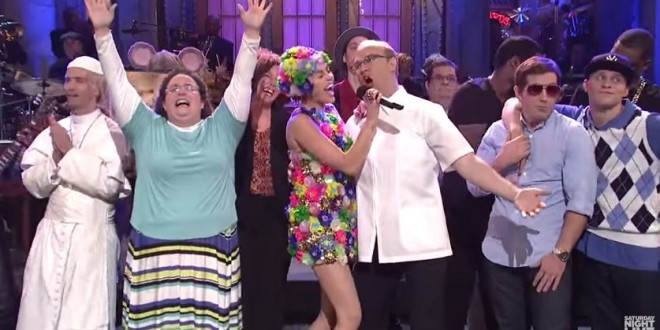 Miley Cyrus kicked off the season premiere of Saturday Night Live by looking back at the biggest names of summer of 2015 – including everyone from Arianna Grande to Kim Davis. Wearing a floral plastic minidress and matching bathing cap, the “Wrecking Ball” singer took aim at herself before beginning her act. “I love hosting this show because it’s live, so my parents know where I’m at for at least 90 minutes,” Cyrus joked. She added, “Tonight I am on a seven second delay – not a television delay, it’s just when you smoke as much as I do you’re always on a 7 second delay.” But Cyrus spent the majority of her opening monologue with a musical number, which she dedicated to the most memorable moments of 2015.