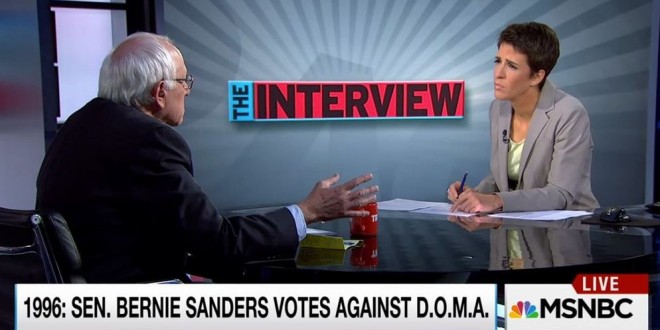 Last night Bernie Sanders was interviewed by Rachel Maddow about the continuing DOMA flap and his own history on LGBT rights. Lucas Grindley recaps at The Advocate:

In Monday’s interview, Sanders explained why it’s important to get the history right, saying, “We live in a tough world and leadership counts.” As one of only 67 people in the House to vote against DOMA, Sanders said, “It is important to stand up when the going is tough.” Sanders has taken some criticism for calling Clinton out at all, since it seems like a break from his usual tendency not to attack his opponent. Sanders viewed his comments as a contrast, instead of an attack. “What the American people and Democrats have to know: Which candidate historically has had the guts to stand up to powerful people and take difficult decisions?”

The interview was prefaced by an intimate personal story by Maddow, who talked about being a 20-year-old AIDS activist. (“It just felt like the AIDS epidemic was roaring through the gay community, roaring through my community,” she said.) Her own story made it clear how unusual it was for Bernie Sanders to stand up for gays and lesbians in 1996. “Those were nasty, nasty times,” concluded Maddow.

But the interview wasn’t entirely positive for Sanders. Maddow followed up the DOMA conversation with several questions to the Vermont senator about why in 2006 he said Vermont shouldn’t move ahead with full marriage equality. “Not right now,” he’s quoted as having said at the time. “The state was torn in a way that I had never seen the state torn,” Sanders noted of the political climate after Vermont became the first state in the nation to pass civil unions. “My view was, give us a little bit of time.”