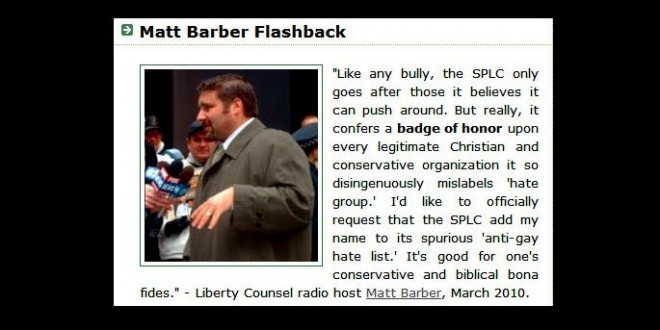 Liberty Counsel: We Are Totally Not A Hate Group

Over the weekend the Associated Press matter-of-factly noted that the Liberty Counsel has been in classified as a hate group. Their report, somehow, has been treated as breaking news in much of the mainstream media even though progressive and LGBT sites have reported on the Liberty Counsel’s hate group status for years and years. (But better late than never, of course.) The AP’s article has inflamed with wingnut-o-sphere (also a good thing) and today the Liberty Counsel weighed in at Charisma News in a typical attack on the Southern Poverty Law Center. They write:

What has Liberty Counsel done to be falsely accused? First, Liberty Counsel has defended marriage and has a sincerely held religious belief that marriage is the union of one man and one woman. Second, Liberty Counsel criticized hate crime legislation for punishing a defendant’s thoughts rather than centering criminal justice on the actual injury suffered by a victim. And third, Liberty Counsel recognizes the human dignity of those who have changed their unwanted same-sex sexual attractions or behavior. Unlike the SPLC, Liberty Counsel does not marginalize their experience or demean the sincerity of their testimony.

Marriage as the union of a man and a woman has been assumed for millennia of human history. This understanding of the created order predates all civil government. It is affirmed from Genesis to Revelation. When Jesus was asked questions about marriage, he went to the defining passages in Genesis: “From the beginning of the creation God made them male and female” (Mark 10:6). The SPLC’s false labeling of people or organizations would mean that every civilization and its people and every major religious denomination would be similarly labeled by the SPLC as a hater or hate group. It is the SPLC that demonizes good people and organizations and spews false accusations against those with whom it disagrees. The SPLC is reckless and its false labels are dangerous.

As the SPLC regularly notes, merely opposing same-sex marriage or hate speech laws does not qualify a group for hate group status. If that were the case, there would likely be hundreds of groups so designated, not a mere two dozen or so. What DOES qualify a group for hate group status is to demonize LGBT Americans as pedophiles, as perverts, as mentally ill, and as literally demon-possessed – all of which the Liberty Counsel has done. (And then some.) It’s more than a little bit comical that people like Matt Barber simultaneously declare it to be a “badge of honor” to be called a hate group, all while running to the wingnut media to bitch about that very thing.