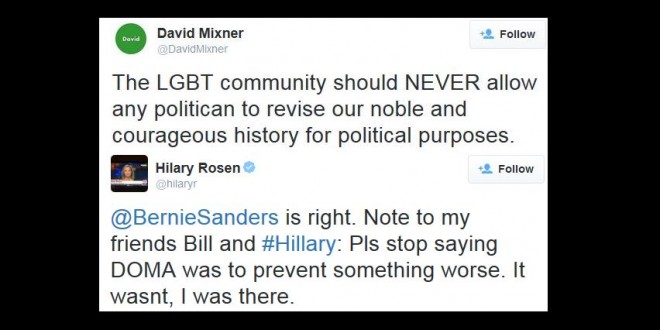 Sen. Bernard Sanders isn’t the only one taking Hillary Clinton to task over her recent assertion that the Defense of Marriage Act was a “defensive” measure to prevent worse discrimination against LGBT people. A number of gay rights activists took to Twitter to say Clinton engaged in historic revisionism during her appearance Friday on “The Rachel Maddow Show” when she said DOMA was a means to stop the enactment of a U.S. constitutional amendment banning same-sex marriage entirely. Many of those activists also tempered their objections by saying Clinton is generally doing right on LGBT rights during her campaign. The notion DOMA was passed to stop passage of a Federal Marriage Amendment has been disputed by Hillary Clinton supporter and former Human Rights Campaign chief Elizabeth Birch, who wrote an op-ed saying “there was no real threat” of a constitutional measure in 1996. The Washington Blade has placed a call to the Clinton campaign to see if the candidate stands by the remarks and with the Human Rights Campaign to see whether the organization has any comment about them.

Hit the link to see more of the tweets.