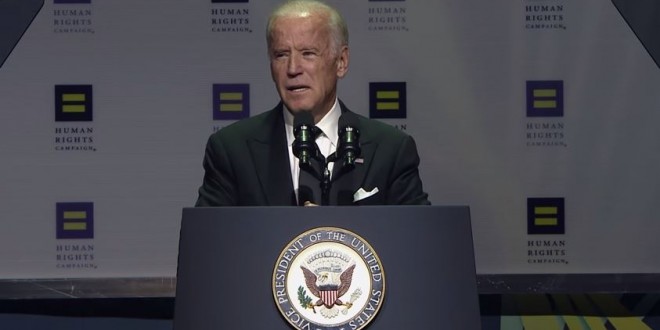 Although he’s previously articulated support for comprehensive legislation prohibiting anti-LGBT legislation, Biden took the opportunity of his speech to explicitly endorse the Equality Act, which would amend the Civil Rights Act and the Fair Housing Act to include sexual orientation and gender identity. “I strongly support the Equality Act, and it will pass, it will pass,” Biden said. “It may not pass this Congress. It will pass because it’s simple and it’s straightforward.” Biden is credited in 2012 with dubbing transgender rights the “civil rights issue of our time,” an assertion he repeated at the dinner as he commended Defense Secretary Ashton Carter for starting a review expected to lead to an end of the openly transgender service in May. “It took the secretary of defense about 10 minutes,” Biden said. “In July 2015 no longer is there any questions, transgender people are able to serve in the United States military.” “All Americans who are able to serve physically should be able to serve,” Biden added. The vice president, whom many are speculating is considering a presidential bid, early in his remarks started to say, “A number of you have spoken to me over the years,” when an audience member interrupted him, shouting, “You should run!” Biden tried to tamp it down, saying. “No. You didn’t say that,” then returned to his remarks.

Below is Biden’s full address. Make some time for it.

Previous Donald Trump: Armed Teachers Could Have Stopped The Oregon Massacre [VIDEO]
Next Hillary Clinton Mocks Donald Trump And Her Own Evolution On Marriage In SNL Skit [VIDEO]