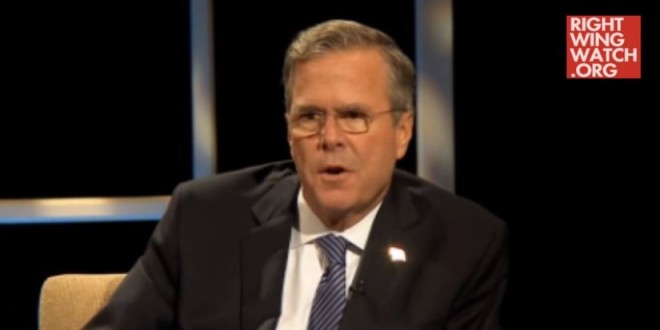 Today, Jeb Bush joined televangelist Pat Robertson for an ostensibly nonpartisan presidential forum, where the former Florida governor received a warm introduction from Religious Right legal activist Jay Sekulow, whose son just so happens to work for Bush. Robertson himself has put Bush at the top of his 2016 “dream ticket.”Towards the end of the interview, Robertson turned to the news that Bush’s presidential campaign is cutting staff and salaries amid declining poll numbers. Bush put a positive spin on the news, insisting that he wanted to create a “lean and mean” campaign and send staffers “to beautiful states like Iowa, New Hampshire, South Carolina and Nevada.” He also placed some of the blame on Donald Trump: “The circumstances when we started the election were different. I have not met a person who thought Donald Trump would be the front-running candidate at this point. God bless him for his success in that regard, we’ll see how long that lasts, but you have to adapt.”