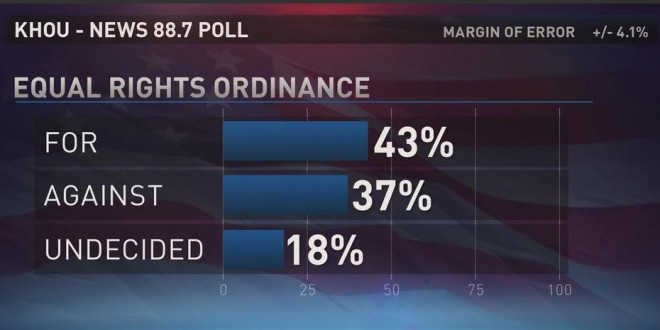 Two separate polls conducted by Houston television stations show that the Yes On 1 vote, which would keep the city’s LGBT rights law, is leading by an uncomfortably close margin. Most worrying are the undecideds – who make up 18% of the KHOU poll and 20% of the KPRC poll, although the Yes side leads 45-36 in the latter survey.

As I’ve reported several times in recent days, multiple national anti-LGBT hate groups are funneling money to the Houston campaign, with NOM and the Family Research Council among them. On our side are the local and national media and many local and national corporations.

Remember the words of Tony Perkins – if they can pull this off in America’s fourth-largest city, they can do this almost anywhere. Please consider making a contribution to Houston Unites, as they’ve a number of smart counter-attack ads. We CAN do this, we’ve done it before.