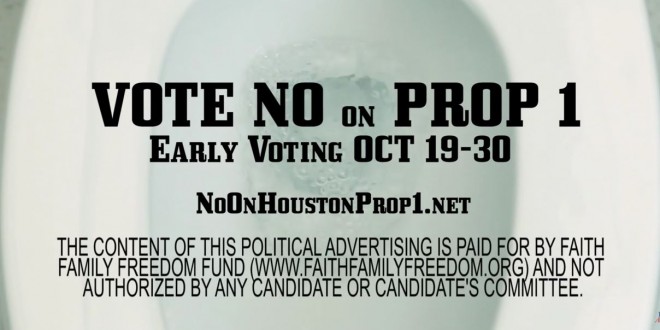 Yesterday the Family Research Council issued a money beg for the $25,000 they claimed to need to produce a television ad for the campaign to repeal Houston’s LGBT rights law (HERO). Very mysteriously, the ad is already done. Via email:

“In the battle over the Houston’s Proposition 1 bathroom bill, LGBT activists don’t have to pay for advertising. The media is doing plenty of it — for free! The latest example is an angry piece in the Washington Post, in which Jonathan Capehart tries — unsuccessfully — to tamp down fears about the measure’s effects. In most of the rant, he takes aim at anyone in Houston who dares to share what the law would actual do — which is force local businesses to celebrate homosexuality and allow grown men and women to enter opposite-sex public bathrooms, showers, and locker rooms whenever they “feel” their biology doesn’t apply.

“If anyone’s guilty of “misinformed hysteria,” it’s the ordinance’s blind support! Not only does the ordinance explicitly state that it’s illegal to bar a person from another bathroom — but it fines anyone who does object up to $5,000! Capehart ignores this, of course, as do many of the measure’s apologists. That’s why the FRC Action’s Super PAC, Faith Family Freedom Fund, is launching a new ad campaign in Houston to set the record straight. To watch the spot, click below. Warning: Side effects may include laughter.”

Nobody is laughing, Tony.