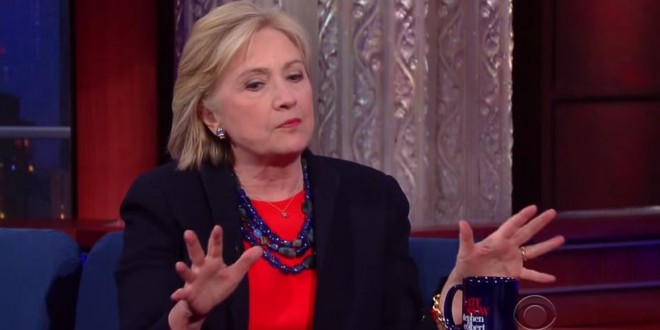 Hillary Clinton appeared on The Late Show last night, where she told Stephen Colbert that she’ll defend advances in gay rights as president. But the real buzz is about Clinton’s statement on banking. Politico has more:

Hillary Clinton would not bail out big banks on the verge of failure if she faced a situation like the 2007 financial crisis, she told Stephen Colbert Tuesday night. Clinton, in an interview with the host of CBS’ The Late Show, was asked Tuesday night, “If you’re president and the banks are failing, do we let them fail this time?” The former secretary responded ‘yes,’ multiple times. “First of all, under Dodd-Frank, that is what will happen because we now have stress tests and I’m going to impose a risk fee on the big bank if they engage in risky behavior,” she elaborated. “But they have to know, their shareholders have to know that yes, they will fail. And if they’re too big to fail then under my plan and others that have been proposed, they may have to be broken up.” “Because if you can’t manage it, it’s more likely to fail,” she said.

Previous Ken Ham: If We Let Gay People Get Married, We Might As Well Stop Wearing Clothes [AUDIO]
Next Anonymous To De-Hood 1000 KKK Members