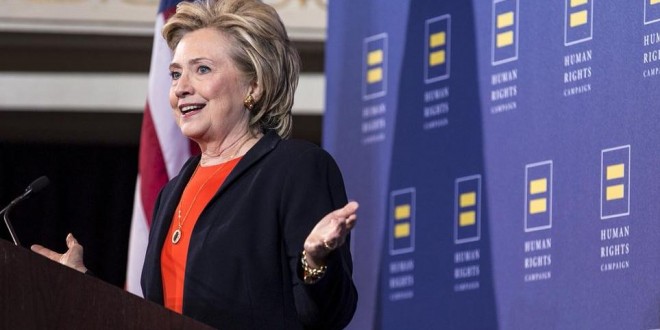 Hillary Clinton this morning addressed staffers and supporters of the Human Rights Campaign in advance of their annual gala tonight in Washington DC. Clinton urged the assembled activists to resist the temptation to relax after the Obergefell ruling, noting that there are people “literally standing in the courthouse door” in an attempt to thwart LGBT civil rights. More from ABC News:

“Ben Carson says that marriage equality is what caused the fall of the Roman empire,” the Democratic presidential candidate said to laughter during a breakfast at the LGBT rights organization’s annual gathering in Washington, D.C. Clinton then mentioned Texas Sen. Ted Cruz, which drew hisses and boos from the crowd gathered inside the grand ballroom of the Mayflower Hotel, and went on to challenge him to join her at a gay pride parade. “Ted Cruz slammed a political opponent for marching in a pride parade. He clearly has no idea what he’s missing. Pride parades are so much fun. I was marching in them back when I was first lady. You should join sometime Senator, come on,” she said. Both Carson and Cruz have said they believe marriage is between a man and a woman. ABC News has reached out to their campaigns for comment to Clinton’s remarks. “Hillary would have everyone believe she’s been in favor of marriage equality since the fall of the Roman Empire,” Carson campaign spokesman Doug Watts said. “When she’s not lying, she’s spinning!”

Tonight Clinton will reportedly appear in the opening monologue of Saturday Night Live. Below is a short excerpt from her speech. I’ll replace that with the full video when it becomes available.

UPDATE: Chris Geidner has more about today’s speech at Buzzfeed.

Calling the ongoing legality of discrimination in some areas of the country “outrageous,” Clinton highlighted her support for the Equality Act, the legislation introduced this spring to ban LGBT discrimination in a variety of areas, including employment, housing, credit, and education. She added that she hoped that some of the people in the room on Saturday morning would be with her when, she said, “I sign it into law.” With regards to the military, Clinton said she supported upgrading the status of discharges of former service members who had been dismissed for being gay. She also backed the administration’s review of the ban on military service by transgender people. “That is an outdated rule, especially since you and I know there are transgender people serving now,” she said, adding that she hoped the U.S. would “join other countries” and end the ban.

UPDATE II: Clinton has followed up her speech with a number of tweeted quotes.