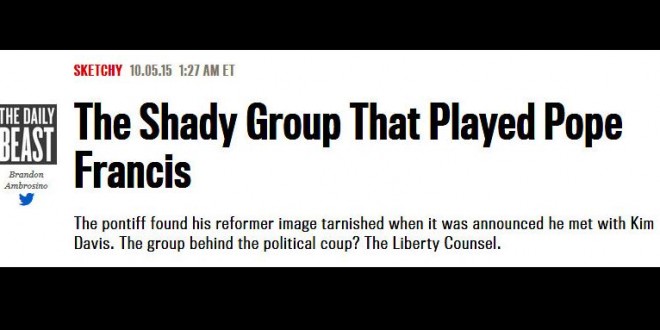 Headline Of The Day

The Daily Beast eviscerates the Liberty Counsel in a column today by Brandon Ambrosio. An excerpt:

The most glaring irony here is that evangelicals are notorious for their negative views of Catholicism, and in particular the pope. Some evangelicals believe the Catholic Church is the Whore of Babylon described in the Book of Revelation. Those beliefs may be limited to a few denominations on the fringes, but it is absolutely the case that evangelicalism holds that Catholicism is doctrinally in error on several major points, including purgatory, prayers to saints, and its veneration of Mary. Indeed, the Liberty Counsel even responded to a few tweets from apparent evangelicals angry that the group would even mingle with the pontiff. It’s certainly bemusing, then, to hear Davis talk about how humbled she was by Francis’ visit, and how encouraging it was to hear he was “on track” with her marriage crusade. It’s equally bemusing to hear Staver heap praise on Francis’ theological positions. The Liberty Counsel’s intentions with Francis weren’t spiritual or religious. They were merely political. Everything about that meeting was calculated to further Staver’s anti-gay agenda.

RELATED: Last year Ambrosino earned the ire of JMG readers with a National Review article titled “I Wasn’t Born This Way, I Choose To Be Gay.”

Previous Petition To Pope Francis: Fire The US Papal Nuncio
Next Sam Smith – Writing’s On The Wall [VIDEO]