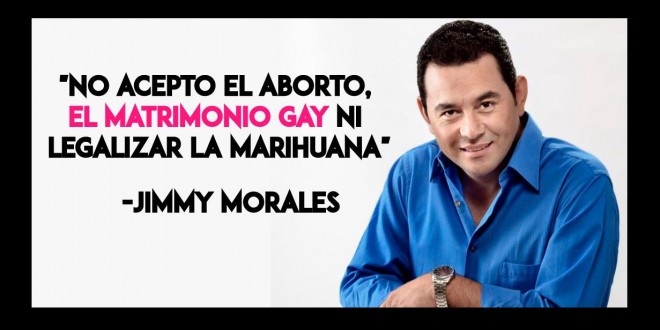 Because worldwide political trends are often contagious, the outcome of Guatemala’s presidential election could have a serious effect on the upcoming U.S. presidential election. Trump, the consummate outsider who’s also like Morales a television personality, has been atop U.S. presidential polls in the GOP primary for more than 100 days so far with less than 100 days to go until the Iowa caucuses. Carson, another outsider and cultural personality, is nipping at his heels with hardly any other presidential candidate on the GOP side anywhere near either of them in polling. On the other side of the election, Clinton is almost certain to win the Democratic nomination — meaning that whoever wins the GOP nomination will be facing off against a former First Lady of the United States. Who’s to say a television personality in the United States can’t beat a former First Lady in a general election here, just like what happened in Guatemala?

The BBC reports on the Guatemala race:

Jimmy Morales polled 72% against the former first lady, Sandra Torres, who is seen by many as part of the country’s unpopular political elite. Ms Torres admitted defeat before all the votes were counted, as the margin of Mr Morales’ lead became clear. The vote took place a month after the resignation and arrest of President Otto Perez Molina. He is accused of leading a corrupt network of politicians and customs officials. The former president denies involvement in a scheme which saw businessmen pay bribes to evade customs charges. Many voters see the comedian as a fresh start following nationwide protests that ousted Mr Perez Molina. “As president I received a mandate, and the mandate of the people of Guatemala is to fight against the corruption that is consuming us. God bless and thank you,” said Mr Morales after the count.

RELATED: Homosexuality has been legal in Guatemala since 1871. There are presently no LGBT anti-discrimination protections or partnership recognitions in Guatemala.