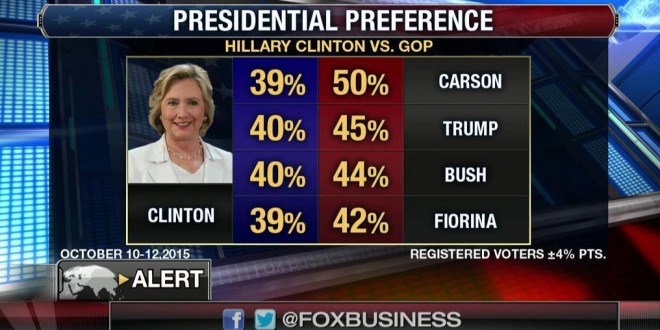 Fox News Poll: Hillary Would Lose To Everybody

A Fox News poll out today shows Hillary Clinton losing to all of the GOP frontrunners in head-to-head matchups:

In hypothetical 2016 matchups with top-tier Republicans, Clinton trails all the Republicans tested. She trails Ben Carson by 11 points and Donald Trump by 5 points. Jeb Bush has a 4-point edge over Clinton, while Carly Fiorina is up by 3 points. Biden fares better. He leads Trump by 13 points and tops Bush by 5 points. Biden is preferred over both Fiorina and Carson by 4 points. And Biden narrowly bests Marco Rubio by 1 point. Though Clinton still dominates the Democratic primary race, the new poll confirms a significant decline in her support since summer. In June, her lead over Sanders was double what it is today (61 percent Clinton vs. 15 percent Sanders). And instead of trailing Trump by 5 points, she topped him by 17 points. Clinton was also up by 6 points over Fiorina then, while she’s down by 3 now.

You might recall that in their final 2012 poll Fox News called the election for Mitt Romney.