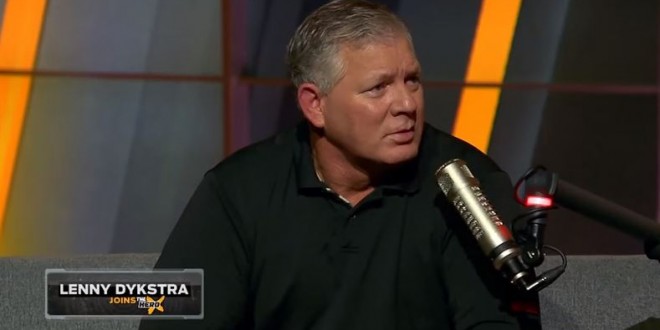 Former New York Mets center fielder and multiple felon Lenny Dykstra this week told a dumbfounded Fox Sports host that he hired private investigators to dig up dirt on umpires, some of them gay, from whom he then extorted favorable game decisions. CBS Sports reports:

“Their blood is just as red as ours. Some of them like women, some of them like men, some of them gamble,” said Dykstra. He then imagined a scenario in which he asked the umpire if he “covered the spread last night” after a called strike, then the strike zone shrunk to his advantage. “It wasn’t a coincidence that I led the league in walks the next few years,” he added. Dykstra led the league with 129 walks in 1993 while with the Phillies. His previous career high was 89 walks, though he missed plenty of time with injuries. Dykstra’s walk rate did spike from 1993-94. Dykstra explained he was doing what “I had to do what I had to do to win, and to support my family.” It’s worth noting Dykstra has had all sorts of financial and legal trouble in recent years, so his reputation is not the best at this time. He also told Cowherd he is working on a book, so this story about hiring private investigators to dig up dirt on umpires could be a ruse to help book sales. If true though, these are some pretty serious admissions — and allegations, he is saying umpires bet on baseball — by Dykstra.

Major League umpires who officiated during Dykstra’s career say he’s out of his mind. If you’re unfamiliar with Dykstra’s criminal and financial saga, visit his Wikipedia page for some truly jaw-dropping incidents, many of them sexual in nature. According to news accounts, Dykstra went from a net worth of $58M to living out of his car in one year. In the clip below, not incidentally, he seems drunk.