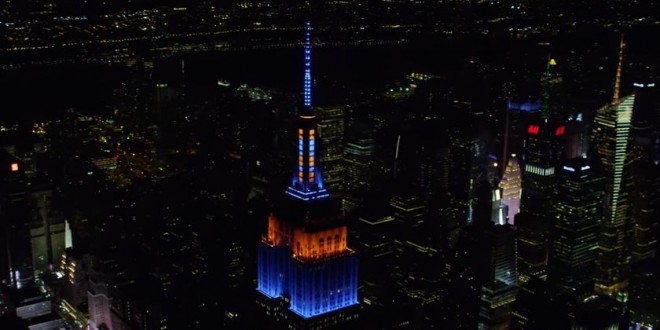 Fifty years ago yesterday the Empire State Building went live with its fancy new FM antenna, which was apparently a very big deal to New Yorkers burdened with transistor AM radios. To celebrate, last night the iconic tower staged a light show to Steely Dan’s “lite rock classic,” FM (No Static At All), complete with the unbleeped F-word and a hired helicopter to record from above. Watch below. More about the sonic landmark from the Audio Engineering Society:

Before the Alford antenna ringing the Empire State Building’s 102nd floor observation gallery went into service, only one station at a time could broadcast from one antenna at a time. The invention of the combined master antenna system embodied in the Alford antenna allowed multiple radio stations to broadcast from a single antenna array, saving space and cost and marking a revolution in FM broadcast technology. Today’s combining systems have improved over the last 50 years and now accomplish superior propagation of radio signals to the largest listening audience in the US.

The Alford antenna was the model for subsequent master antenna sites in Toronto, St. Louis, Houston and Minneapolis-St. Paul, and eventually even back at the Empire State Building, where a new master antenna system was commissioned in the 1980s. The original 1965 Alford antenna continues to serve as a backup and was pressed into service after 9/11 to provide emergency replacement antenna capacity for stations that were displaced from their World Trade Center sites. Today, the new Master FM antenna systems reach the most listeners anywhere in the world, and is the largest sophisticated FM combiner in the western hemisphere.

Some of my fellow eldergays might remember the thrill of having FM in the car.

Previous Sarah Palin: I’m Not One To Claim Victim Status But Here’s How I’m Totally A Victim Of The GOP
Next RNC Caves, Fires NBC From Upcoming GOP Debate