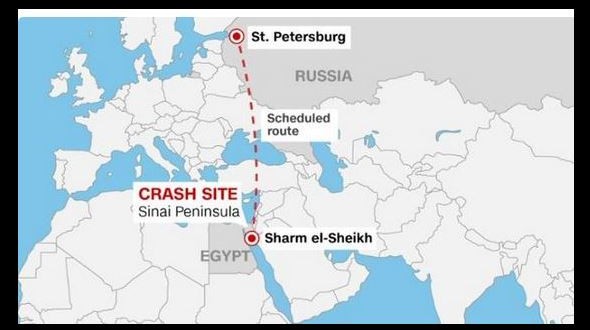 A Russian airliner has crashed in central Sinai killing all 224 people on board, Egyptian officials have said. The Airbus A-321 had just left the Red Sea resort of Sharm el-Sheikh, bound for the Russian city of St Petersburg. Wreckage was found in the Hasana area and bodies removed, along with the plane’s “black box”. An official described a “tragic scene” with bodies of victims still strapped to seats. Russian President Vladimir Putin has declared Sunday a day of mourning. He has ordered an official investigation into the crash of flight KGL9268, and for rescue teams to be sent to the crash site. Sinai has an active militant network, and on Saturday afternoon, jihadis allied to the so-called Islamic State made a claim on social media that they brought down the plane. But Russian Transport Minister Maksim Sokolov told Interfax news agency that “such reports cannot be considered true”. No evidence had been seen that indicated the plane was targeted, he said.

Security experts say the plane was flying beyond the range of shoulder-mounted missiles known to be possessed by ISIS militants.