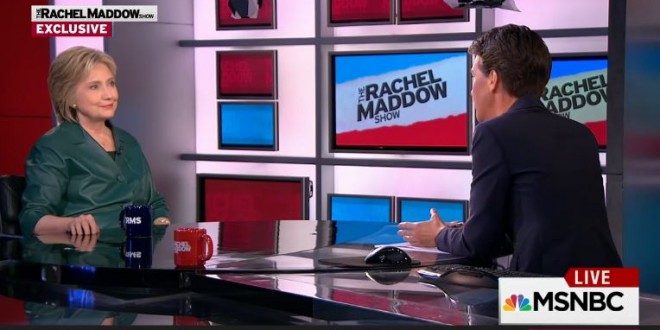 Last night Hillary Clinton told Rachel Maddow that DOMA and DADT were “defensive actions” taken by her husband. Andy Towle has the quote:

“On Defense of Marriage, I think what my husband believed – and there was certainly evidence to support it – is that there was enough political momentum to amend the Constitution of the United States of America, and that there had to be some way to stop that. And there wasn’t any rational argument – because I was in on some of those discussions, on both ‘don’t ask, don’t tell’ and on DOMA, where both the president, his advisers and occasionally I would – you know, chime in and talk about, ‘you can’t be serious. You can’t be serious.’ But they were. And so, in a lot of ways, DOMA was a line that was drawn that was to prevent going further. It was a defensive action. The culture rapidly changed so that now what was totally anathema to political forces – they have ceded. They no longer are fighting, except on a local level and a rear-guard action. And with the U.S. Supreme Court decision, it’s settled. ‘Don’t ask, don’t tell’ is something that – you know, Bill promised during the ‘92 campaign to let gays serve openly in the military. And it’s what he intended to do.”