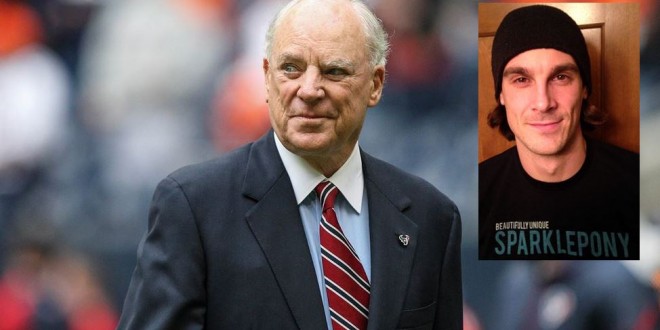 You may not have heard, but the NFL has been working really hard to clean up its image with regards to LBGT issues; what with the whole Michael Sam draft fiasco, my experiences in Minnesota, and the fact that no player feels comfortable enough to come out as openly gay despite the league having over 1800 individuals at any given time. Yet here you are, inexplicably spraying a whirlwind of fecal chunks all over the league’s PR efforts like an incontinent water buffalo after an ex-lax smoothie.

It seems to me — and this is just pure conjecture, a hypothetical, if you will — that your donating to an anti-equal rights group just miiiiiiiiight make people think twice about whether the NFL really means what it says on this issue. Like that time in Arizona, when the Religious Freedom Restoration Act (another attempt by some of history’s cockroaches masquerading as people to curtail the freedoms of others) got shot down because the NFL stepped in and said they weren’t okay with blatant discrimination in a state in which they operate.

Hit the link for much, much more! (Tipped by JMG reader Erik)