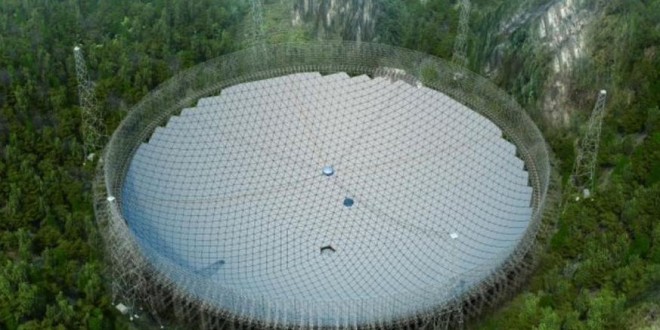 China is constructing what will be the world’s largest radio telescope. The Independent reports:

Assembly of the five-hundred-meter Aperture Spherical Telescope, or FAST, began in July and is expected to be completed in 2016. Once finished, the reflector dish of the telescope will be 500 metres in diameter, replacing Puerto Rico’s Arecibo Observatory, only 300 meters in diameter, as the world’s largest. The wider the dish, the more effective the telescope becomes at picking up weak messages from outer space. Nan Rendong, the chief scientist of the FAST project, told the Xinhua news agency: “A radio telescope is like a sensitive ear, listening to tell meaningful radio messages from white noise in the universe.” “It is like identifying the sound of cicadas in a thunderstorm.” Rather than sitting above ground, the telescope’s dish is sunken into a natural bowl-shaped valley in China’s Guizhou province. The geography of the surrounding hills and the remoteness of the site mean that there will be less interference from Earth-based radio signals.

China is also planning a manned mission to the moon and the launch of a space station.