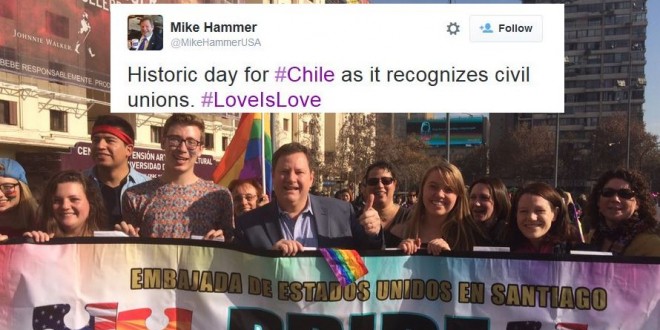 In Chile, a new law comes into force on Thursday which will make it easier for unmarried co-habiting couples to co-own property and make medical decisions. The law will apply to both heterosexual and same-sex couples. Government spokesman Marcelo Diaz said the law “was unthinkable a few years ago” in Chile, one of the most socially conservative countries in the region. Gay rights advocates say they hope it is a first step on the road towards allowing same-sex marriages. Co-habiting couples who register under the new law will be able to claim pension benefits and inherit property if their civil partner dies. It will also make it easier for people to get custody of their partner’s child if he or she dies. The Law for All Families was passed in January after years of lobbying by activists. Officials said 1,600 couples had already signed up to register their unions.

The Chilean government will have extra staffers on hand today to handle the proceedings as registrars are on strike over an unrelated matter.

RELATED: Elsewhere in South America same-sex marriage is legal in Argentina, Brazil, French Guiana, and Uruguay. Civil unions are legal in Colombia and Ecuador. A same-sex marriage lawsuit is pending before the Venezuelan Supreme Court. Homosexual acts remain illegal in Guyana, but nowhere else on the continent.