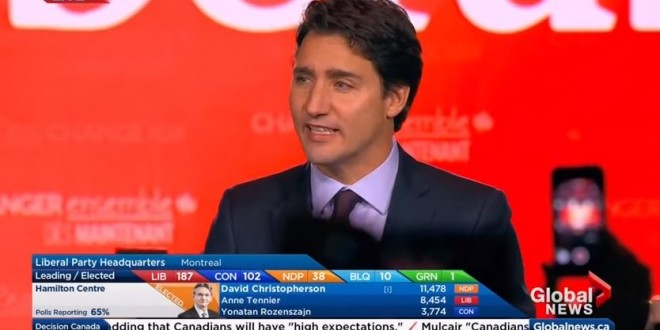 This will be the second time for Canada to be led by a Trudeau, as the 43-year-old Liberal leader follows in the footsteps of his father, Pierre Elliott Trudeau, who served as prime minister for almost 16 years before retiring in 1984. “Sunny ways my friends. Sunny ways,” Trudeau told his enthusiastic supporters in Montreal. “This is what positive politics can do.” Canadians, he said, had sent a clear message that it’s “time for change in this country my friends. Real change.” “We beat fear with hope,” Trudeau said. “We beat cynicism with hard work. We beat negative, divisive politics with a positive vision that brings Canadians together.”