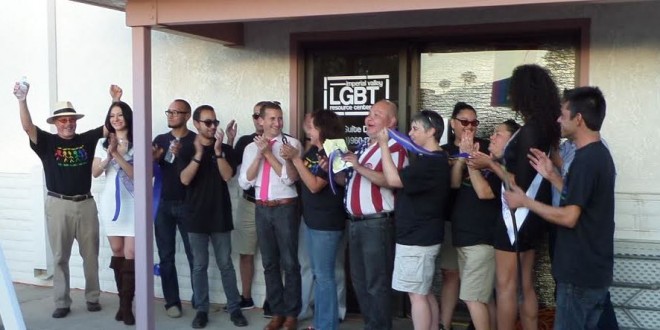 Longtime JMG reader Luis sends us the above photo from the grand opening of an LGBT center in Imperial County, California. If Imperial County rings a bell for you, that’s because it was once at the center of the Prop 8 battle that eventually ended up before the US Supreme Court. Anti-gay groups turned to deeply conservative Imperial County because they needed a governmental body to defend Prop 8 when the state refused to do so. Luis was interviewed by the Imperial Valley Press:

Hundreds of people took part Friday in what many here are calling a major milestone for the local gay community: the grand opening of the Imperial Valley LGBT Resource Center. Among them was Imperial resident Luis De La Cruz, who clearly remembers the wide support Proposition 8 had received in the Valley during the November 2008 state elections. He also clearly remembers feeling embarrassed for the county in 2010 after a local elected official took part in defending the same-sex marriage ban, which had been challenged in federal court and was ultimately struck down by the U.S. Supreme Court in 2013. “In less than 10 years we went from Prop 8 to opening the very first LGBT center (in the Valley),” he said. “It seems like a giant step forward.” Since word had gotten out that the resource center was in the process of opening its doors here in El Centro, De la Cruz, who is openly gay and a volunteer at the center, said it has received an outpouring of support from a wide range of local individuals, agencies and organizations.

RELATED: In 2011 the Ninth Circuit Court ruled that Imperial County did not have standing to defend Prop 8. In 2012 the Ninth Circuit overturned Prop 8 on constitutional grounds, but stayed their ruling pending the final decision by the US Supreme Court, which came in June 2013 on the same day that the Court struck down DOMA.