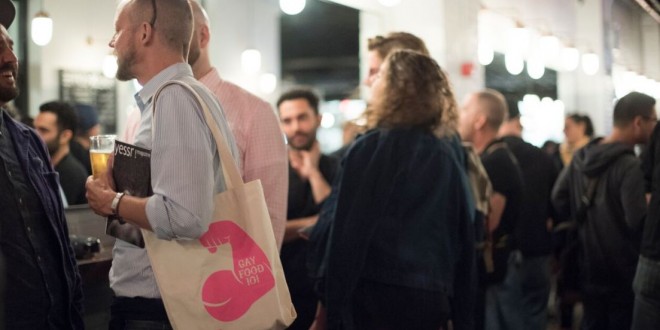 BROOKLYN: Hanging With The Gay Foodies

I recently trekked out to Crown Heights, Brooklyn to hang out with the gay foodies, a world in which many of my friends (and you, maybe) are deeply immersed, but one that is, regrettably, rather alien to me. The event was called Gay Food 101, where self-publishing giant Blurb Books hosted LGBT chefs, food columnists, and authors who explored the “intersection of gay culture and food culture.” Food Republic recaps the night:

One of New York City’s most tantalizing annual events, Food Book Fair, has spun off a new series called Food Book Party. And what a party it was! The series kicked off on Thursday, October 8, with “Gay Food 101: An Oral History,” an exploration of gay culture and food culture, in restaurants, aesthetics and food media. The event was centered around a moderated conversation between editors from two premier publications devoted to this very topic, Jarry and Mouthfeel magazines, alongside Glady’s beverage director Shannon Mustipher and food writer John Birdsall. Max and Eli Sussman’s Ed and Bev’s outpost served up chili-smothered hot dogs and fries with black and white cookies and brownies from Baked for dessert.

The talks were eagerly received by the packed audience, who chortled at inside jokes (that were lost on me) and who nodded in recognition as speakers recounted difficulties faced by openly gay chefs. Much of the discussion focused on famed closeted chefs of the past and on some renowned chefs whose gayness should have been obvious. (I’d name-check them here, but again – I was out of my element.) Anyway, if you’re one of them there gay foodies, the organizers have gifted us with five of the tote bags sported by the gentleman in the top photo. If you want one, say so in the comments and we’ll do the usual random selection and notify you via Disqus.