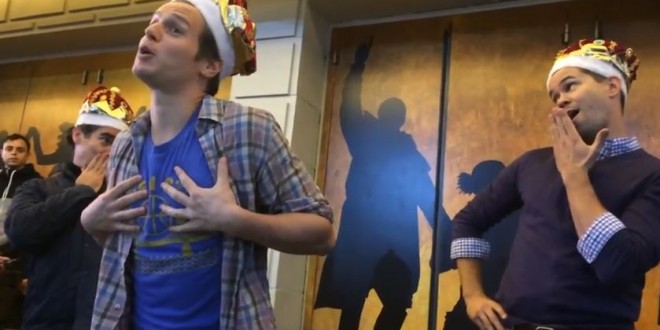 Some gay Broadway magic happened on Friday night at the stage door of sold-out smash rap musical Hamilton, where stars of musical theater have been showing up to entertain the crowds lined up in hopes of scoring one of the $10 lottery tickets. Deadline recaps:

In this weekend’s edition, cast member Renee Elise Goldsberry lip-synchs the title role (Hamilton creator and star Lin-Manuel Miranda is sidelined with the flu) while Jonathan Groff, who plays King George; Brian d’Arcy James (who originated the role in the downtown tryout and currently stars in Something Rotten! not to mention the soon to open film Spotlight) and Andrew Rannells, the former Book Of Mormon and Hedwig star and Girls regular play the show’s social-climbing Schuyler sisters as if to the manner born, all sporting crowns, in a karaoke set that drew appreciative huzzahs and mayhem from the crowd, as you can see.