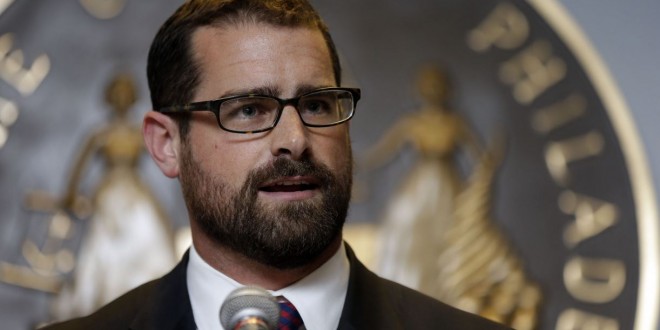 Today comes the formal announcement of what many of you have surely known for several days. Pennsylvania Rep. Brian Sims, his state’s first out legislator, is running for Congress. Via press release:

On Tuesday, Pennsylvania State Rep. Brian Sims announced his candidacy for Pennsylvania’s 2nd Congressional District. Sims, an attorney and civil rights advocate in Center City Philadelphia, has spent his career as a relentless advocate for social, racial, and economic justice. Sims is the first openly gay person elected to the Pennsylvania General Assembly. “I’ve spent my life taking on big challenges in order to do what’s right,” said Sims. “Whether tackling gender and pay equity as a civil rights attorney, or standing up for justice reform in Harrisburg, I’ve never backed down from the big fights. And I never will.”

“Brian is a ferocious advocate for the people of this community,” said local activist Andrea Sanders. “When it comes to fighting for the people he represents, there is no one more dedicated or tenacious than Brian. He’ll make a great Congressman.” Congressman Chaka Fattah currently represents the 2nd District. “We need a progressive Congressman who will stand up for opportunity and justice for everyone, not just those at the top,” said Sims. “In Congress, I’ll fight to invest in our kids and our classrooms, create real economic fairness and opportunity, and stand up to the NRA to get the guns off our streets.”

On July 29th, 11-term incumbent Democratic Rep. Chaka Fattah was indicted on 29 federal racketeering charges, opening the door to challengers like Sims. Fattah has easily won election to the US House in every election, taking nearly 90% of the vote each time. Watch Sims’ announcement video below.