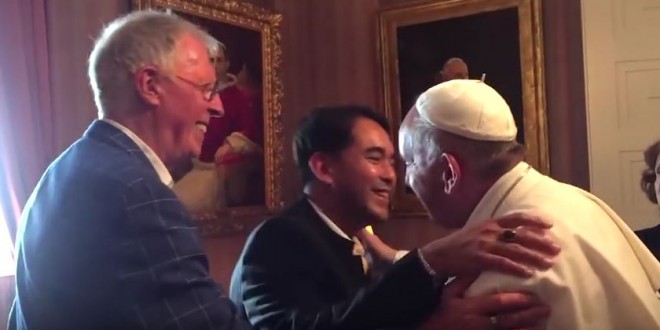 BREAKING: Only Real Private Audience Held By Pope During US Visit Was With GAY COUPLE [VIDEO]

The day before Pope Francis met anti-gay county clerk Kim Davis in Washington last week, he held a private meeting with a longtime friend from Argentina who has been in a same-sex relationship for 19 years. Yayo Grassi, an openly gay man, brought his partner, Iwan, as well several other friends to the Vatican Embassy on September 23 for a brief visit with the Pope. A video of the meeting shows Grassi and Francis greeting each other with a warm hug. In an exclusive interview with CNN, Grassi declined to disclose details about the short visit, but said it was arranged personally by the Pope via email in the weeks ahead of Francis’ highly anticipated visit to the United States. “Three weeks before the trip, he called me on the phone and said he would love to give me a hug,” Grassi said.

In a statement on Friday, the Vatican said that the meeting with Davis was not intended as a show of support for her cause and said “the only real audience granted by the Pope at the nunciature (embassy) was with one of his former students and his family.” “That was me,” Grassi said. Grassi said that Pope Francis taught him in literature and psychology classes at Inmaculada Concepcion high school in Flores, Argentina, from 1964-1965. Grassi said the Pope has long known that he is gay, but has never condemned his sexuality or his same-sex relationship. Grassi said he and Iwan (he declined to disclose his last name due to privacy concerns) also met Francis last year in Rome. “He has never been judgmental,” Grassi said. “He has never said anything negative.”

I’ll add video to this post when it becomes available.