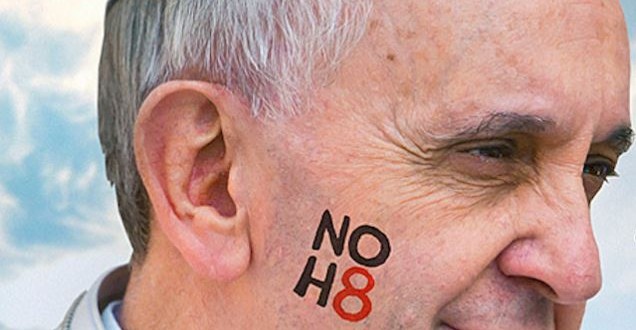 Ben Shapiro Has The Papal Sadz

Ben Shapiro is railing against the leftist homo-hugging Pope over at Breitbart, where they have illustrated his rant by slapping the famous NOH8 logo on the face of Pope Francis. He writes:

Is there any doubt that this media-savvy Pontiff felt the need to prevent leftist attacks on him over the Davis meeting by first disassociating from Davis, then by putting out news of the gay meetup? Why else would the media find out about the two stories simultaneously, and just days after news broke of the Davis meeting in the first place? Clearly, the Pope believes that his need for leftist media approval to push his leftist agenda – radical environmentalism, redistributionism, pacifism – trumps emphasis on key elements of Catholic doctrine. If Francis has to buy off the press with stories ripping Kim Davis and championing papal tolerance for homosexual couples, that’s because he has something bigger at play. Evidence continues to mount that Pope Francis is a devotee of liberation theology, the Marxist theology prominent in Latin America and decried by Pope John Paul II (“does not tally with the church’s catechism”) and Pope Benedict XVI (“singular heresy”).

Shapiro is also ever so pissed about a bit of Vatican wordage, saying that by describing the “homosexual partner” of his former student as “family,” they have made a “major departure from Catholic teaching.”

Previous Vatican Observers: It’s Likely That The Pope Will Shitcan The Guy Who Sprung Kim Davis On Him
Next Well-Strung – The Devil Went Down To Georgia