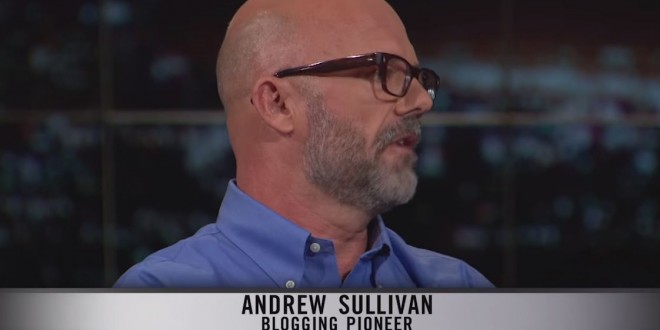 Andrew Sullivan appeared last night on Real Time With Bill Maher where he declared Hillary Clinton to “unbelievably useless” and a “talent-free hack.” More from Mediaite:

Sullivan argued as Clinton’s fiercest critic, and frequently drew disapproving jeers from Bill Maher’s audience. Sullivan tore into Clinton’s time at the State Department, identifying the “disastrous Libya invasion which repeated every mistake that George W. Bush made.” Despite Maher’s oft-cited criticisms of Clinton, the show’s host found himself forced to defend the Presidential candidate to the forceful rhetoric of Sullivan. Maher added, “Why do you hate her so much? Were you molested by a real estate lady? She’s a boring centrist, it should never raise to the level of hate.” As soon as Sullivan turned to the issue of the email server, the audience again turned on him. He cited the “…dumb error with the email server,” and noted that 60% of the country doesn’t think she’s trustworthy. Maher quickly retorted, “60% of the country believes in Noah’s Ark!” Before the conversation spun even further out of control, Maher drew it to an abrupt close and settled it with “I get it — you don’t like her.”