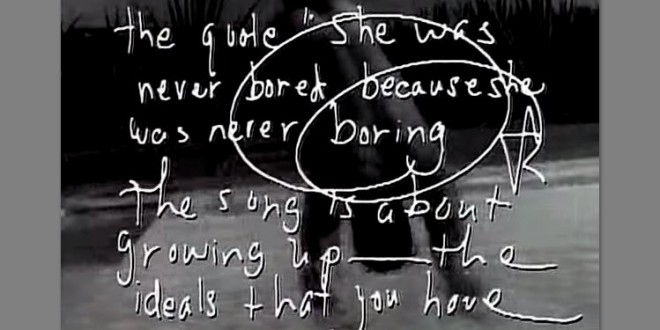 All The People I Was Kissing, Some Are Here And Some Are Missing: 25 Years Of Being Boring [VIDEO]

It was 25 years ago this week in 1990 that the Pet Shop Boys released Behavior, the album that provided Being Boring, which many consider to be the most heart-wrenching and beautiful song about AIDS, loss, and survivorship. Christian Gerard at Pop Matters looks back: Being Boring sets a bittersweet tone for the album. “All the people I was kissing / some are here and some are missing,” Tennant sings, wistfully paying tribute to those lost. Being Boring is nostalgic with memories of whimsy and pain. Musically the song is a dreamlike swirl of strings and keyboards over a relentless groove, with guitar by the late J. J. Belle. Being Boring traces a young man’s journey out of the closet and into a world of possibility and pitfalls. It’s about a sense of community, and of reverence. At the beginning of the beautiful and provocative video directed by famed photographer Bruce Weber, handwritten words scrawl across the screen, “The song is about growing up—the ideals that you have when you’re young and how they turn out.”

As we know, reality can often veer far from the path of the idealistic dreams of youth. Tennant sings in a half-whisper that is often double-tracked and echoed by a line of keyboard. With each verse the swell of keyboards grows until it becomes a glorious wall of sound. It’s a masterful opening, musically and thematically. Being Boring is an elegant artifact of its era. It encapsulates feelings that many young people coming out today might not be able to fully grasp, as a quarter century has passed and we exist in a wholly different reality with its own unique challenges.

Five years ago, on the 20th anniversary of Being Boring, a Guardian writer ventured to call it the greatest pop single ever. Tennant’s plaintive vocal style only adds to the pathos. And it’s all infused with the glamour and spirit of writer Zelda Fitzgerald (whose 1922 essay, Eulogy on the Flapper, contained the song’s ideological kernel: “She refused to be bored chiefly because she wasn’t boring.”) Greatest single ever, you ask, really? Aren’t we dealing with something intangible here? Yes, but if art exists, as the writer Annie Dillard argues, “to make the stone stony”, what could be stonier?

Being Boring has followed me through my own teenage parties, student days, fumbled relationships and drunken evenings. In the summer it feels nostalgic, rose-tinted; in the winter it’s a sun-beam, a cause for celebration. “I remember dancing to this,” says one of the hundreds of comments on YouTube, “and I’d get tears in my eyes thinking of all the friends and lovers I’ve lost, where my life has gone and where it ended up.” In short, does another song evoke, so perfectly, the sigh of experience with the hope of living?

As I have said before on this here website thingy, I too consider Being Boring to be (at the least) the greatest Pet Shop Boys achievement in a decades-long career of almost uncountable triumphs. Many Pet Shop Boys songs reference AIDS, of course, but none of them stab my heart as Being Boring does with the line quoted in the title of this post. A late friend of mine once described the song as “gorgeous torture.” Indeed.

At least part of Being Boring‘s success is due to its release coming at the height of the plague, when all seemed hopeless and lost, making the song a vivid landmark, a sonic signpost in the lives of gay men at its debut in 1990. But interestingly, Neil Tennant has revealed that the track’s achingly melancholy melody was created in a attempt to copy 80’s disco producers Stock Aitken Waterman (Dead Or Alive, Rick Astley, Donna Summer, Kylie Minogue.)

“We were always fascinated about the way Stock Aitken Waterman would change key for choruses. And so the verse of Being Boring was in A minor or D minor, maybe, after we went up a semi-tone into A flat for the chorus. Which we would never have done before. It wasn’t an attempt to be mature; it was actually an attempt to be like Stock Aitken Waterman.”

Being Boring and Bruce Weber’s video (filmed on Long Island, by the way) both belong in an LGBT museum.

Previous Florida Paper To Marco Rubio: Do Your Job Or Resign
Next Rafael Cruz: Gays Want To Legalize Pedophilia [VIDEO]