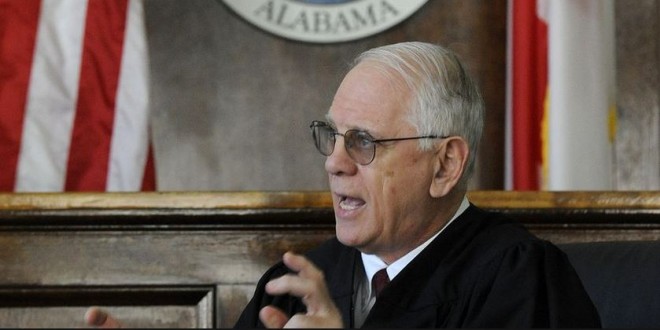 Anti-gay Alabama probate Judge John Enslen wants his state’s Supreme Court to rule that only the federal government should have to issue marriage licenses to gay couples. AL.com reports:

Enslen also states that since the federal government is the one imposing same-sex marriage on the states, it should be the one to enforce it. “Therefore, the recognition of same-sex marriage as a civil right under the United States Constitution vests the U.S. Congress with the authority and responsibility to enforce the right and to provide the appropriate licensing, the same as it exclusively does in many other areas of federal law,” he wrote. Federal agencies already issue many licenses, Enslen argues. Those agencies include the EPA, U.S. Fish and Wildlife Service, Federal Communications Commission, Federal Aviation Administration, and the Bureau of Alcohol, Tobacco, Firearms and Explosives, he states.

Judge Enslen adds his voice to that of Judge Nick Williams. Last month Judge Williams filed a motion and memo with the Alabama Supreme Court, arguing “the Obergefell decision is wholly lacking in lawful Supreme Court authority,” because “the United States Constitution defines the powers of the federal government, and gives no branch of the federal government power to redefine marriage.” “The Fourteenth Amendment never withdrew from the various states the authority to maintain Natural Marriage as an exclusively monogamous heterosexual institution,” Judge Williams argued.

Citing the example of Abraham Lincoln and the Wisconsin Supreme Court, both of whom ignored the U.S. Supreme Court on the issue of slavery, Judge Williams called for the Alabama Supreme Court to “recognize the historic moment to return balance to our system of federalism and restrain lawlessness,” by doing its duty in response to the “judicial power grab of five lawyers” – “a naked judicial claim” “fundamentally at odds with our system of government” – and recognizing that it is “not bound by decisions of the United States Supreme Court where it acts outside its authority and legitimacy.”