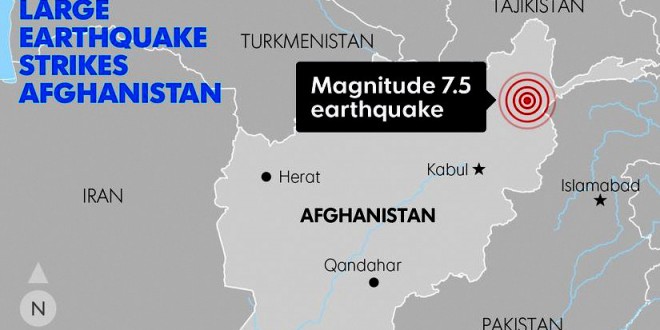 Scores of people have died after a magnitude 7.5. earthquake struck Afghanistan on Monday, causing deaths in neighboring Pakistan and tremors in northern India. The U.S. Geological Survey said the epicenter of the quake was in the far northern Afghan province of Badakhshan, which borders Tajikistan and China. “Significant casualties are likely and the disaster is potentially widespread,” the USGS said. Pakistani officials said the quake killed 62 people in northwestern Pakistan, bringing the total death toll from the disaster to 79, the Associated Press reported. Agence France-Presse said the quake lasted for at least a minute. In Afghanistan’s Takhar province, west of Badakhshan, at least 12 students were killed in a stampede at a girls’ school and at least five people died when homes collapsed in the Khyber Pakhtunkhwa province in Pakistan, the AP reported.

The death toll is expected to soar as reports come in.