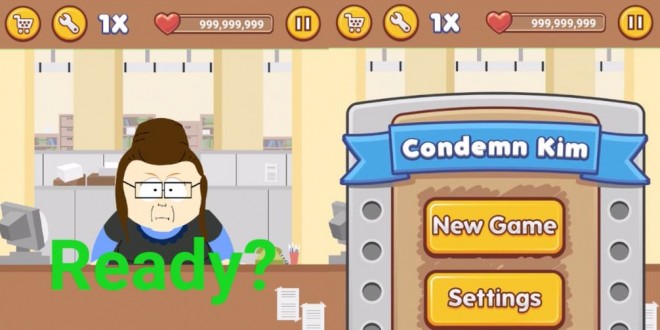 JMG reader Andrea points us to a just-launched game for smartphones:

Fight Kim, Defeat Kim, Condemn Her. Battle against bigotry and achieve equality for all. Join us in a battle for the ages. On one side of this virtual battle field littered with shredded paper and sadness, festers Kim – an agent of civil discrimination. On the other side, the warriors of love, the soldiers of acceptance, and the army of equality. Features – Become a soldier for equality, toss marriage applications to damage Kim, bring her HP all the way down and send her to jail, build an army of supporters with each game played and increase the damage you can inflict, earn power ups to defeat Kim’s bigotry agenda, some add time to do damage, others give you a higher damage multiplier, hurl divorce papers at Kim resulting in a Critical Hit. Each Critical hit gives you extra time on the counter and 10x damage.

It looks like the game is free in the Google Play store with 50% of in-app purchases going to “LGBT charities.”