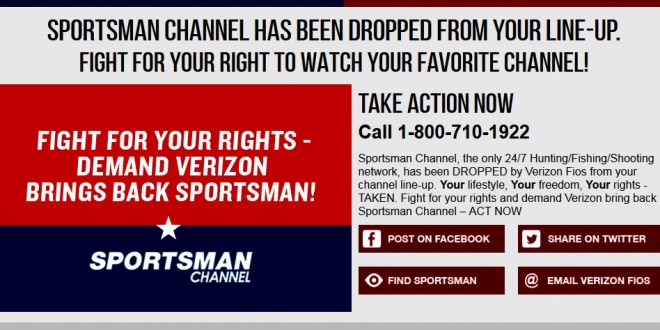 Citing low viewership, Verizon has dropped the mostly unwatched Sportsman Channel, which is really only known for carrying Sarah Palin’s latest reality show attempt. Visitors to the channel’s website are now greeted with a splash screen which calls on their 57 viewers to deluge Verizon with complaints for violating their God-given freedom to watch shitty hunting shows.  And speaking of shitty hunters, most outraged of all is Ted Nugent, who of course blames this on our communist Kenyan dictator: “The number of freedom-abusing, freedom-destroying, fundamental transformation, abuse of power and corruption and fraud and deceit and anti-Americanism that runs amok in this country from the president on down, it breaks the hearts of good Americans by the hour across this country. When Verizon cancels Sportsman Channel, it’s a direct result of the anti-gun, anti-freedom, anti-hunting, anti-wildlife, anti-science, anti-Americanism that has infested our media across this land.” Enjoy the meltdown below.

Previous NORTH CAROLINA: All Magistrates In McDowell County Refuse To Officiate At Any Marriages
Next Hate Group Leader Tony Perkins Is Furious After Frontrunner Donald Trump Blows Off Duggar Fest 2015