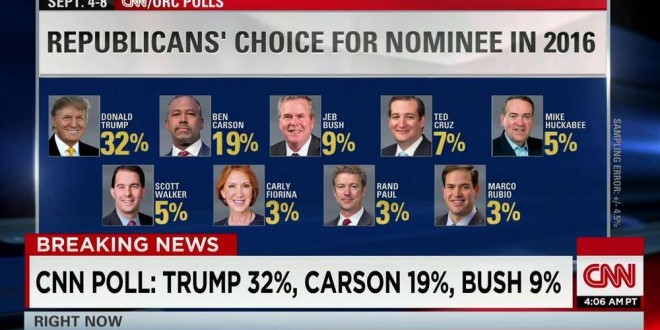 Donald Trump has become the first Republican presidential candidate to top 30% support in the race for the Republican nomination, according to a new CNN/ORC Poll, which finds the businessman pulling well away from the rest of the GOP field. Trump gained 8 points since August to land at 32% support, and has nearly tripled his support since just after he launched his campaign in June. The new poll finds former neurosurgeon Ben Carson rising 10 points to land in second place with 19%. Together, these two non-politicians now hold the support of a majority of Republicans and Republican-leaning independents, and separately, both are significantly ahead of all other competitors. Former Florida Gov. Jeb Bush stands in third place with 9%, down 4 points since August, and Texas Sen. Ted Cruz holds fourth place with 7%. Former Arkansas Gov. Mike Huckabee and Wisconsin Gov. Scott Walker follow at 5%, with all other candidates at 3% or less, including Florida Sen. Marco Rubio, who notched the only other statistically significant shift in the poll by falling 5 points since August.

Previous Viral Video Of The Day
Next Trump Hits Back At Carson: He’s Just An OK Doctor