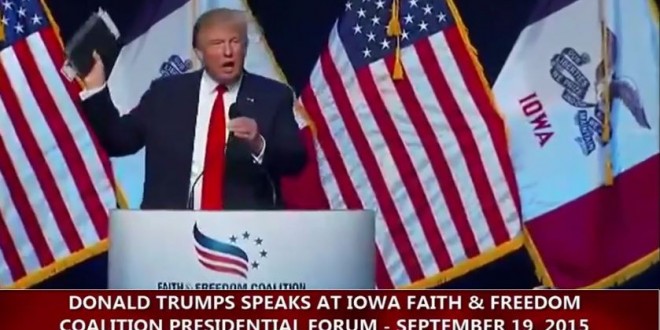 Trump To Fundies: I’m One Of You [VIDEO]

Waving his family bible, yesterday Donald Trump took the stage to tell attendees at an Iowa Faith & Freedom Coalition event that he is definitely one of them.  The crowd ate it up, despite the growing distrust of Trump’s frequently proclaimed deep faith by some prominent evangelicals.  Trump followed up his entrance with a rambling rant about the continuing controversy over his handling of an anti-Muslim supporter on Thursday.

Previous PHILADELPHIA: Mayor Hopes To Raise LGBT Issues With Pope To “End Judgment”
Next Billboard Of The Day