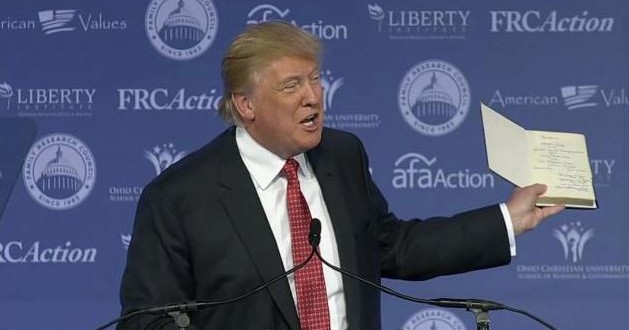 Trump To Duggar Fest: I’m Really One Of You [VIDEO]

Waving his alleged family bible, Donald Trump reassured suspicious attendees of the Values Voter Summit that he is indeed one of them. They weren’t buying it. From the Washington Post:

Donald Trump, whose candidacy has become defined by thick crowds of cheering fans, heard something unfamiliar at the annual Values Voter Summit: boos, directed at him, for what he’d just said about a fellow Republican. “You have this clown, Marco Rubio, and I’ve been so nice to him!” said Trump. Jeers nearly drowned him out. Rubio, who has steadily risen in polling (while remaining far behind Trump), had given a well-received speech just hours earlier. Trump was used to mentioning an opponent and hearing a crowd heckle him or her in absentia, but for a moment he seemed to have lost the room.

Trump didn’t mention abortion — not even in the context of defunding Planned Parenthood — religious liberty, or marriage rights. He did not mention Kim Davis, the anti-gay-marriage Rowan County clerk who has drawn cheers in brief sightings at the Omni Shoreham, and who will receive an award tonight. The time that might have been spent on specific social issues was given over to a long criticism of the nuclear deal with Iran, and some repetitive attacks on the media for failing to report that he “won the debate” at the Ronald Reagan Presidential Library. When he did discuss religion, he hoisted his Bible and stuck to generics. “I believe in God,” he said. “I believe in the Bible. I’m Christian. I love people.”