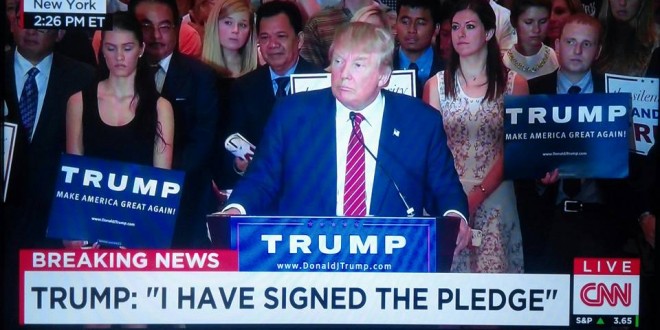 Donald Trump has signed the pledge. The Republican presidential front-runner met privately with Republican National Committee Chairman Reince Priebus Thursday afternoon, and soon after, came out to the lobby of Trump Tower to declare that he has signed a loyalty pledge. This means Trump has promised to support the party’s eventual nominee — whoever that may be — and that he will not run as a third-party candidate. “The best way for the Republicans to win is if I win the nomination and go directly against whoever they happen to put up. And for that reason, I have signed the pledge,” Trump said, holding up the paper. “So I will be totally pledging my allegiance to the Republican Party and for the conservative principles for which it stands.” He added: “We will go out and fight hard, and we will win.” Trump has enjoyed a sustained lead in national polls, and the sit-down with Priebus comes amid unease about whether the billionaire businessman would rebuff the party and seek the White House as an independent. Previous Mike Huckabee Has The Kim Davis Sadz
Next BREAKING: At Least Three Rowan County Clerks Dodge Jail And Will Issue Marriage Licenses
UPDATE: Only Davis’ Son Will Not Comply