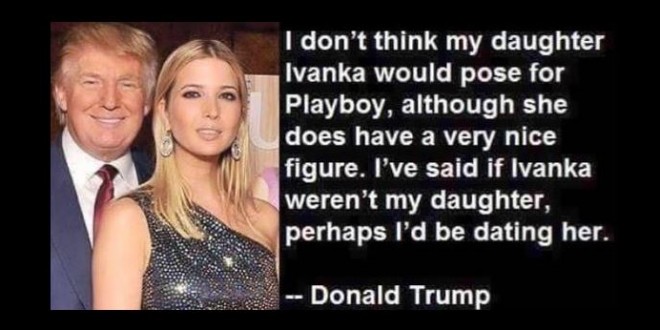 Above is what Donald Trump said about his daughter in 2006. Talking Points Memo has the latest quote:

Donald Trump really appreciates his daughter Ivanka’s good looks – probably a little too much. In a new interview with Rolling Stone, Trump delivered a more-than-vaguely-sexual response when the magazine’s reporter praised Ivanka Trump, a prominent businesswoman in her own right. “Yeah, she’s really something, and what a beauty, that one. If I weren’t happily married and, ya know, her father …” he said. It’s hardly the first time Trump, the Republican Party’s 2016 frontrunner, has gone a shade too far complimenting his daughter. “If Ivanka weren’t my daughter, perhaps I’d be dating her,” Trump cracked in a now-infamous 2006 interview with “The View.” Three years earlier, the billionaire real estate mogul described Ivanka as “6 feet tall” with “the best body” during an appearance on Howard Stern’s shock jock radio show.

Previous Biden: I Still Haven’t Made Up My Mind [VIDEO]
Next Glenn Beck Turns On Sarah Palin: I’m Embarrassed That I Ever Supported That Clown [VIDEO]