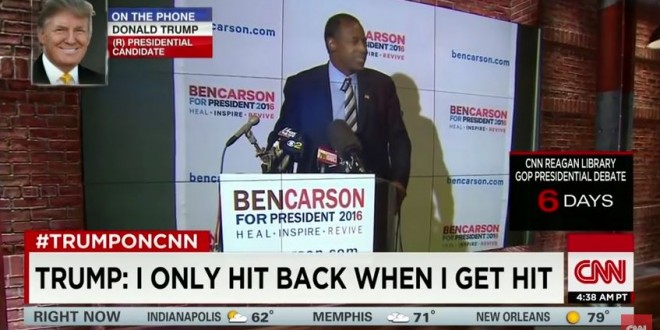 Trump Hits Back At Carson: He’s Just An OK Doctor

As we expected, Donald Trump is blasting both barrels at Ben Carson, who yesterday finally played the “I’m more Jesus than Trump” card. The Hill recaps this morning’s interview:

Donald Trump said on Thursday that fellow 2016 Republican presidential candidate Ben Carson is being hypocritical for bringing religion into the race. “Who is he to question my faith?” Trump asked host Chris Cuomo on CNN’s “New Day.” “He knows nothing about me.” “I am a man of faith,” he said. “I hardly know Ben Carson. I’m a believer, big league in God. I will hit back on that.” “I don’t think he’s a great religious figure,” Trump added. “If you look at his faith, you’re not going to make it very far.” “Ben Carson is not going to be your next president,” Trump said.

In the clip below, Trump dismisses Carson’s famed history as a surgeon, saying, “He’s just an OK doctor.”