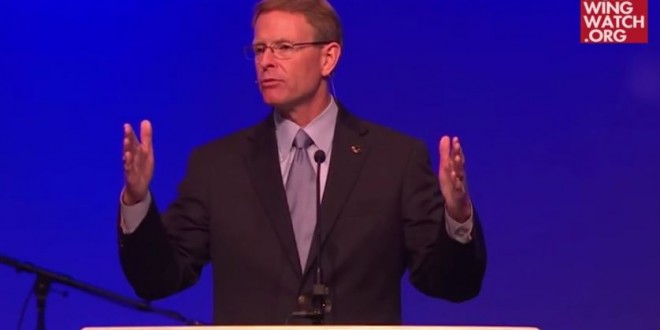 Last week, the Family Research Council’s Tony Perkins convened an emergency meeting of his “Watchmen on the Wall” pastors’ group to address “the aftermath of the seismic Supreme Court ruling on marriage.” Perkins told the group gathered at a Dallas Baptist church that thanks to the Supreme Court’s decision, “we are at a moment of urgency unprecedented in the history of this country.” Perkins told the story of King Uzziah, who according to the Book of Chronicles, ruled competently over Judah until he became proud and attempted to burn incense in the Temple, something only priests were allowed to do. Ultimately, the priests stopped Uzziah and God smote him with leprosy, he was ostracized and died. Perkins, he said, was struck by the “parallel between Judah under King Uzziah and America under Barack Obama.” “What struck me was that on the eve of this Supreme Court decision, on June the 26th, if you watched the news you saw that the president had bathed the White House in the colors of the so-called gay pride,” he said. “The parallel between the pride of Uzziah and the pride of our national leader shaking his fist in the face of God was stark and alarming.”

Previous Viral Video: Literal Catfishing
Next Public Policy Poll: Majority Of Republicans Believe Obama Is Muslim, Only 14% Sure He Is Christian