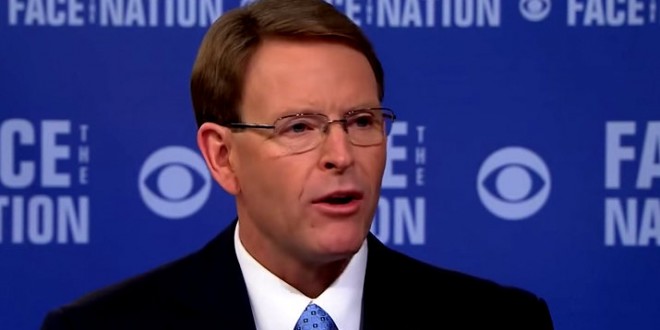 Tony Perkins: Muslims Have No Rights Under The United States Constitution [AUDIO]

On his “Washington Watch” radio program yesterday, Perkins repeated his claim that Islam is not protected under the U.S. Constitution. While discussing GOP presidential candidate Ben Carson’s recent statement that he would never support a Muslim candidate for president, along with the claims of Kim Davis’ critics that a clerk would never receive such praise from the Religious Right had she been a Muslim, Perkins railed against media commentators for “interjecting” Islam “into all of these discussions.” He said that the media is using Islam as a “wedge” to divide conservatives, suggesting that Kim Davis’ decision to impose her Christian beliefs onto her county office was different because Islam is not protected in the Constitution, while Christianity is. “Religious freedom and our liberty is ordered liberty under the Constitution,” Perkins said. “And as Dr. Carson pointed out, and I know this is driving the left crazy, that Islam is not just a religion, Islam is an economic system, it is a judicial system, it is a compressive system which is incompatible with the Constitution. That’s what Dr. Carson said and he happens to be correct.”

Perkins is echoing fellow hate group leader Bryan Fischer, who regularly claims that only Christians are protected by the First Amendment.  And don’t forget – this weekend every GOP presidential candidate except Donald Trump will be kissing Perkins’ ass at the Values Voter Summit in DC.

Previous Kim Davis: It’s A Privilege To Be Used By God To Impose My Religion On Unwilling Americans
Next Rose McGowan – RM486 [VIDEO]