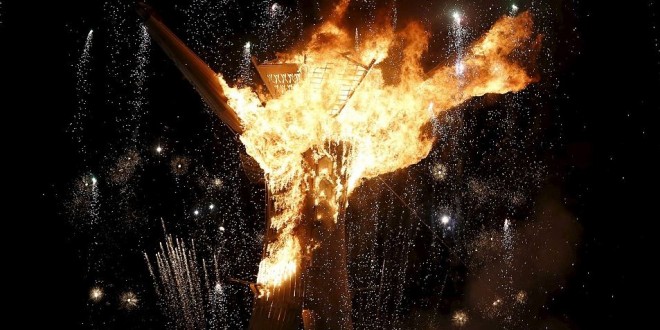 The Man Has Burned [VIDEO]

The Man burned in the Nevada desert on Saturday night. And so did something else. USA Today reports:

Timothy Leary, the late father of LSD, was memorialized at Burning Man after a fantastic procession and burning of his ashes in the Black Rock Desert. It was a spectacle that not even he probably could have imagined, as actress Susan Sarandon led a march with his ashes into a temporary church built as an art installation in the desert for the week-long festival. “I think he’d be so happy. I think he would have loved the chaos (of Burning Man). He would have loved it,” said Sarandon, one of Leary’s closest friends, in an interview. “And all these people honoring him with LSD.” When Leary died in 1996, several of his friends, including Sarandon, received some of his ashes. His friends sent most of his ashes to outer space in 1997, but Sarandon kept some. “When I went to Burning Man last time, that’s when I thought I’d bring him back here,” Sarandon said. The church was scheduled to burn as part of the event on Saturday after the “man”, a giant wooden structure, burned.