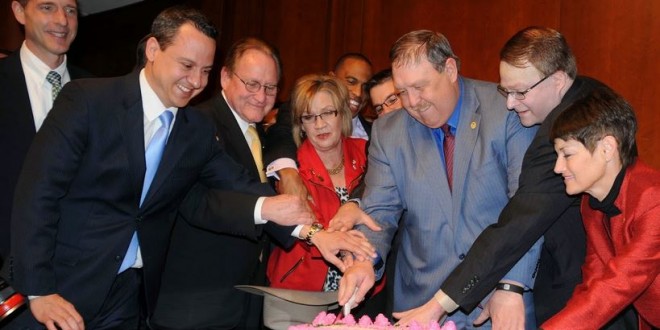 Remember when the haters “celebrated” the tenth anniversary of the Texas ban on same-sex marriage? An anniversary which never came? Here’s some REALLY delicious cake for them:

The attorneys for same-sex couples who successfully challenged Texas’ gay marriage ban in federal court are seeking nearly three-quarters of a million dollars in fees and costs from the state. In a 27-page motion filed Friday, attorneys from Akin Gump Strauss Hauer & Feld in San Antonio asked U.S. District Judge Orlando L. Garcia to award them $720,794 in fees and $20,203 in costs. Akin Gump represented two same-sex couples in De Leon v. Perry, which was filed in October 2013 and resolved pursuant to the U.S. Supreme Court’s June 26 ruling in favor of same-sex marriage. Under federal law, prevailing parties in civil rights cases are typically eligible for fees and costs.

By the way, that asshole cake ceremony happened back in February. The actual tenth anniversary of the ban would have been this November 9th. Remind us to send them a huge fucking rainbow cake on that day. (Tipped by JMG reader Mike In Texas)