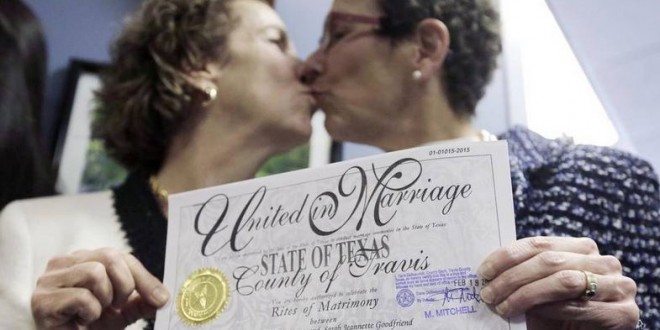 Texas has issued an estimated 2,500 marriage licenses to same-sex couples since the practice was legalized, nearly 6 percent off all marriage licenses statewide, according to state estimates. Although applications no longer include gender identifiers, officials base the estimate on “what we can assume from the applicants’ names,” Carrie Williams, spokeswoman for the Texas Department of State Health Services, told the Fort Worth Star-Telegram. The agency maintains vital records for the state and notes about 43,500 marriage applications since June 26, the day the U.S. Supreme Court swept away same-sex marriage bans in Texas and other states. In Tarrant County, officials received almost 3,500 applications, with about 300 from same-sex couples, a rate of almost 9 percent, the newspaper reported.

As it did in many other states, it’s expected that the rate of same-sex licenses in Texas will fall off now that the pent-up demand has been met.

Previous What Will Kim Davis Do Today?
Next Inside Gotham’s New Subway Station [VIDEO]