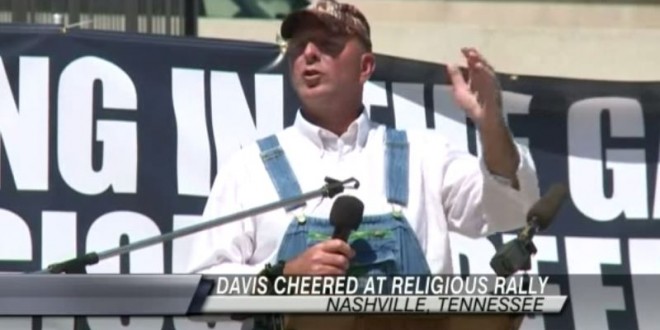 The husband of Kim Davis and Rafael Cruz, father of Ted Cruz, headlined a Nashville rally yesterday as lawmakers introduced a bill that seeks to void the Obergefell ruling. The Tennessean reports:

“Natural marriage between one (1) man and one (1) woman as recognized by the people of Tennessee remains the law in Tennessee, regardless of any court decision to the contrary,” the bill states. “Any court decision purporting to strike down natural marriage, including (a recent U.S. Supreme Court decision), is unauthoritative, void, and of no effect.” Rep. Mark Pody, R-Lebanon, and Sen. Mae Beavers, R-Mt. Juliet, filed the “Tennessee Natural Marriage Defense Act” on Thursday, the same day roughly 400 people attended a “Religious Liberty Rally” at the State Capitol in Nashville. “Marriage is between a man and a woman in Tennessee,” Pody yelled, to roars from the crowd. “We’re going to tell the attorney general, he will defend marriage in Tennessee as it is written on our constitution,” Beavers said, immediately after Pody. It’s unlikely the bill would be found constitutional if passed.