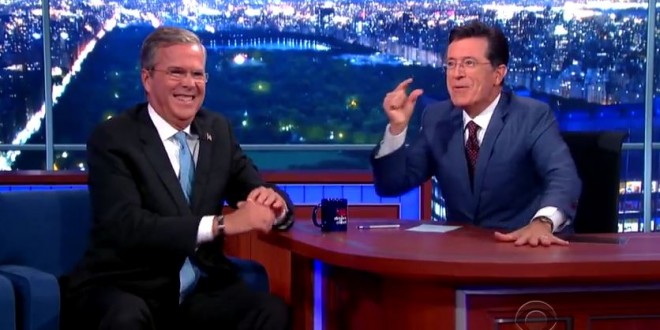 Colbert asks a pretty simple question: Why does Bush want to be president? “Cause I think we’re on the verge of the greatest time to be alive, but our government isn’t working,” he responds. “But Washington is a complete basket case.” Later he concedes that both sides of the aisle can work together. “I don’t think Barack Obama has bad motives. I just think he’s wrong on a lot of issues,” he says. Silence in the studio. “Oh, you were so close to getting them to clap!: Colbert says, advising Bush that he needs to pause to give the crowd time to clap, then hit them with the part they don’t want to hear.

“There is a non-zero chance I would vote for you,” Colbert tells Bush. They talk about more of Bush’s ideas for helping the country and some of his work in Florida, and then segues into Bush’s campaign poster which just reads “Jeb!” Colbert makes fun of it for awhile. He asks about Bush’s mom saying that maybe we don’t need another Bush family member or Clinton in the White House, and Bush assures Colbert she was just kidding.

Time to instigate some family drama: Colbert gives a shout-out to his own family members in the audience, and then asks Bush to critique some of his brother’s presidential policies. “Without in any way diminishing your love for your brother, in what ways do you politically differ from your brother, George?” Bush responds that his brother didn’t control Republican congressional spending enough. Meanwhile, Bush says that in Florida, he’s so conservative on spending that his nickname is “Veto Corleone.” Colbert likes that, but points out “He is an anti-hero in that movie.”

The full interview isn’t yet available, but Bush came off as surprisingly amiable and was fairly well-received by a New York City audience that was surely predisposed not to treat him well.