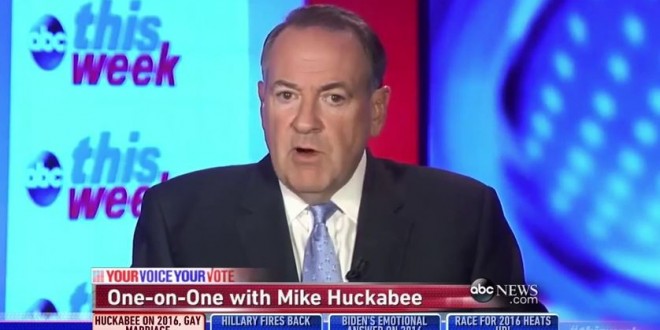 George Stephanopoulos today asked Mike Huckabee if he would resign the presidency over gay marriage. Huckabee dodged the question, saying that would never happen because there’s no such thing. Mediaite recaps:

Stephanopoulos asked Huckabee exactly what’s the difference between Davis’ actions and refusing to issue interracial marriage licenses. Huckabee insisted it’s totally different because interracial marriage doesn’t “redefine” the institution of marriage. He kept ripping into the Supreme Court, saying they don’t get to make laws, and calling Democrats hypocrites since some very prominent ones “choose what laws they support.” Stephanopoulos still pressed him on the exact difference, and even asked him if he would resign the presidency rather than carry out any policies that go against his religious conscience.