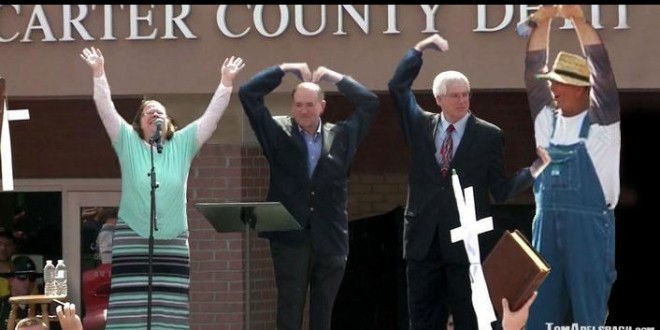 Another day, another smackdown for the Liberty Counsel and their star martyr. Talking Points Memo has the latest:

A motion by Kim Davis — the anti-gay marriage clerk in Kentucky — to halt a requirement that she issue marriage licenses to gay couples was denied by a federal appeals court Tuesday. Davis is suing Kentucky Gov. Steven Beshear (R) and state librarian Wayne Onkst for enforcing a requirement that Kentucky clerks grant same-sex marriage licenses, which she objects to on religious grounds. She had ask the 6th Circuit U.S. Court of Appeals to temporarily halt the requirement while the lawsuit proceeds. “Davis has not demonstrated a substantial likelihood of success on her federal constitutional claims,” the panel of judges said in their order denying the request.

Previous Jim Bakker: Buy My End Times Rations Because Your Neighbors Will Eat Your Babies [VIDEO]
Next TRAILER: The Jungle Book